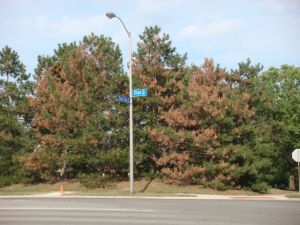 Taken from the famous Buffalo Springfield 1966 song “For What It’s Worth” the lyrics in my blog title are so appropriate. Something BIG is happening to mature Austrian pine (Pinus nigra) trees all over the Centerville-Washington Township area. Have you noticed these large long-needled conifers dying in your community?

According to the ODNR’s Division of Forestry the Austrian pine is the pine most susceptible to Diplodia Tip Blight, a fungus that commonly attacks mature trees that have been stressed. And these trees have seen stress! This menace will slowly kill the tree over several years and wreak havoc in mass plantings as it spreads to surrounding trees. If it was present last year, I must have been oblivious. THIS year….. it is everywhere. Just drive down Clyo Road around Alex-Bell. Or check out I-675 between the Centerville and Wilmington Pike exits. I what I see from my car is any indication, we’re on track to soon lose thousands of pine trees. 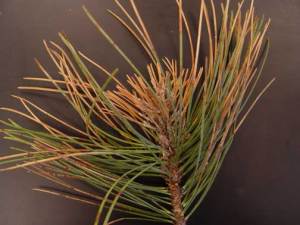 Regional Urban Forester Wendi Van Buren notes, “A telltale way to determine of a tree is infected with Diplodia tip blight is to look for the signs of the pathogen, which consist of tiny black, fungal fruiting bodies (pycnidia) that are formed on the surface of the infected needles and cones.” Read more about it  HERE on this OSU extension fact sheet.

I attended the perennial seminar at Knollwood today and came home with 4 new perennials!! Don’t miss out on Knollwood’s next seminar, Saturday, September 3 at 10am and again at 11am at St. Luke’s Catholic Church for: “Learn to Plant Like the Pros”. Learn as John Scott narrates as the landscape crew installs a job from start to finish. Space is limited and reservations are required. Call 937-426-0861.

“Clip and Cook With Herbs”  Learn how to harvest and dry a myriad of herbs or make a culinary wreath at the Thursday, September 8 seminar (Centerville garden center location) at 10 am or 6 pm. Event will repeat at the Beavercreek garden center at 1 pm on Saturday, September 10.