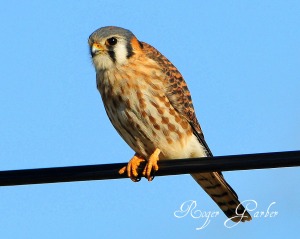 I hope I never lose the burning desire to learn more about natural history. I knew that Mother Nature could be quite the designer but I learned some new things at the Wildlife Diversity Conference this week. Things that tell me she has quite a few more tricks hiding up her sleeve. From discovering how nonnative earthworms are detrimentally impacting our forests to learning what is down in a terrestrial crayfish tunnel….It was great. Sponsored by the Ohio Department of Natural Resources’ Division of Wildlife, this annual conference draws nearly 1000 people to hear researchers who are tops in their fields. Consider attending next year. You won’t regret it.

Perhaps you’ve heard it said, “Tell me something I don’t know.” I’ll try to add a new snippet in my posts that just may give the reader something to ponder. Something to demonstrate just how magnificent the natural world is. Here we go: 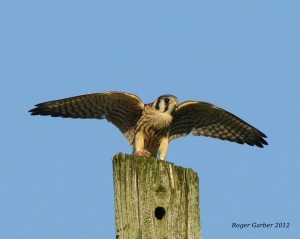 Did You Know? The American Kestrel (Falco sparverius) is the smallest of our falcons. About the size of a Mourning Dove, they can frequently be seen sitting on a power line or telephone wire or hovering over a field just waiting to pounce on an unsuspecting meadow vole or grasshopper. It goes without saying that raptors (hawks, falcons, eagles and owls) have great eyesight but here’s something even more unusual. Because kestrels can see ultraviolet light, and because vole urine reflects that color, it’s possible that kestrels can follow vole urine trails to potential prey. Go figure! Thank you to our friend Roger Garber who kindly provided some of his spectacular photos for this post.

Now in its sixth consecutive year, the popular Wildflower Pilgrimage is a weekend event hosted in southern Ohio celebrating one of Earth’s greatest natural spectacles – the grand showcase of wildflowers gracing the world’s temperate forests in the spring. Located at the southern edge of the glacial advance, and also occupying the edge of the Appalachian foothills, this region has one of the richest wildflower displays to be found in America’s Eastern Forest. The Wildflower Pilgrimage is timed to catch the blooming of many of the showiest species and will be held April 20-22. Check it out HERE.

The area garden centers are BURSTING with a riot of colors and fresh new ideas to get you in their doors and out in your garden. Grandma’s Gardens and Landscaping (Centerville/Waynesville) is celebrating with their Spring Preview Open House March 9-11. Knollwood Garden Center (Beavercreek) has already started their spring series of seminars. This Saturday, March 10 at 10 am is “Spring Tonic: Early Vegetable Gardening”. Call the store to register at 937-426-0861. Meadow View Growers (New Carlisle) also has a list of upcoming seminars. Check them out HERE. Siebenthaler’s (Centerville) is having a Potato Planting Party. Check it out HERE.